skip to main | skip to sidebar

I was toooooo lazy to write EVERYTHING down... so i just dotted someout on Notepad and copied it over here... one of these days when i'm really rajin i'll post up my WHOLE info. if i can remember la....

Atama + Produced 2 remix with my production partner Jessel
under the name Jazz The Chemical.
(She Just Teasin Remix & Can't Stop The Sumazau Remix)

Softwares. A blessing and a curse. For those who can't play musical instruments... i couldn't play shit 3 year back. Software is everything.
I "use" to live on samples. For those who don't know, its snippets of audio, a bass line, a keyboard playing 4 chords. I use to take bits and pieces and put it all together as something new. Shit i still do that, just not as dependent as before la...
The 3 songs you can here from my blog and the one i put up for download were all done on SONY ACID PRO 6. 100% loops...

Anyways just to sum things up since my mind suddenly just went blank... now a days i use multiple software to create a song... i finally pieced the flow of linking softwares when i was working at RAM Production. Now i'm working at a iMotion Production. for those who are using softwares like Cakewalk or Cubase for production, try using the ReWire function. even Fruity Loops has it.

Ok enuff is enuff... my production is something like this, work flow wise

Peace One
Posted by CCPereira at 7:15 AM 3 comments:

Bring The Heat Back

This is a link to a Promo version... only 2 verses of this song...
Lyrics are on a previous post. Don't be shy y'all do leave comments.


(if the link doesn't open a page, kindly copy n paste the address to ur browser... working on a better filehosting)
Posted by CCPereira at 8:27 PM No comments:

LYRICS: Bring The Heat Back

Bring Back The Heat

V1
The time has come to distinguish fans from critiques,
wannabes and pure addicts,
posers and microphone handlers,
consumers and abused users,
the intellects and those trying to connect,
the movement supporters and those stuck at the moment,
those who emcee to spark dead cells,
and those who emcee just to sell,
a thin line bordered by a bombastic gap,
welcome to the sounds of backpackin rap,
the pure essence, not just words,
but poetic sentence, the reason rewind buttons were invented,
check the vocab of this local vocal,
within the system like Ghost In The Shell,
the one u love to hate,
since 98, spittin future wisdom u couldn't relate
so i had to bring the heat back,
show u how hiphop is hiphop,
not something u cud pick the mic,
switch ur name and just start to rap

V2
I create beats that bangs,
if u head noddin, peep'in the lyrics,
i can put away the mic and stop lettin my head hang,
stop dancing for a moment and let ur head think,
the music's been the same for the past 10 years,
same voices same faces, same music just different covers,
still sellin thousands of tapes, dumb luck,
or they've got 4 leaf clovers,
but thats it, its stagnant no movement, thats why we are where we still are,
and not crossing oceans,
its called playing it safe, why u wanna change if the people is still buying,
people are still buying coz they gave up on change,
only a handfull believe in moving forward,
the rest are stuck in time,
since they came out in the 80's, their fans are still making babies,
stuck with the same melody, same progression and same production
thinks i'm stating the obvious and killing a nation?
when was the last time u saw a Sabahan's video clip on TV stations

V3
yeah i bounce it back to the days,
when mc's spit for reason,
now its just spittin for vengeance and spitting for venom,
but that be a different topic for a different day,
back to the present,
what u hear in your ear ain't logical mind play,
i look far forward, sonic soundscapes,
that explains your minds flat escapades,
Digital Licks mutha*,
Pioneers of the new age,
Loosen up ur ear drums, let ur mind out of its cage,
1-3-5 mentality ain't good enuff for musical dexterity,
i say it sincerely, the music is good, its just done poorly,
how we supposed to move ahead, if u ain't wakin up early,
they say talk is cheap, but lets face it,
you ain't running since talking means that u ain't spending,
u wanna say i'm fuckin up the culture,
i say i represent the culture since no ones seem to have seen the culture.

Whut up peeps of all creeps of nature!

It's been 2 years since the article of my album came out. And guess what? Still NO ALBUM!

Waaahahhahaha... freaking sad i tell you.

Here's a quick rundown on why it ain't out yet.

- Got involved with a new production company: iMotion Production Sdn. Bhd.
- Found the girl of my dreams and getting engaged!
- Setting up the studio in iMo and getting the software n hardware to work properly
- Found out new ways of doing chord progression
- Working on Jiaja's debut album
- Working on Sasuka's EP

and on my album side:
- Deciding which tracks to keep and which to put in the "Useless" or "Maybe" bin
- Filtering my lyrics. Basically redoing most of it
- Than realize it might be a good idea to just release 2 EP's in a year.

oh... and also trying to get money into our company! 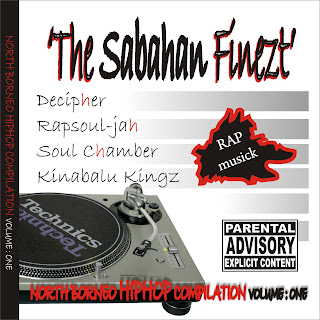 trying to get Kinabalu Kings into the fold... if i can find where they are at the moment.

all in all life's still messy as usual.

peep the link to my amp page to hear my stuff

Peace One
Posted by CCPereira at 8:45 PM 2 comments:

DECIPHER EP - The Darker Side of Light